Earlier we had alerted to a change in sheet design adopted for the Buckingham Covers Royal Flying Corps stamp sheet issued recently.  Here is the pre-issued artwork and the as-issued image. 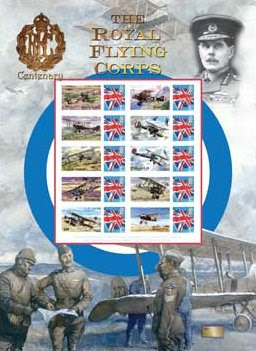 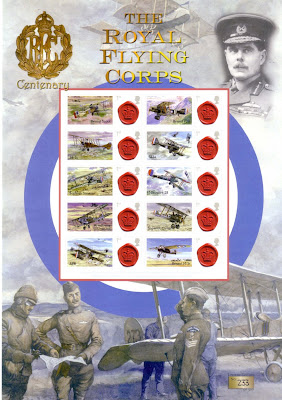 I recently received a letter from Buckingham Covers asking me to return the Commemorative Cover issued by them for this issue as they had inadvertently failed to add a King George V 2d stamp and cachet that had been included in the pre-issue artwork for this cover. 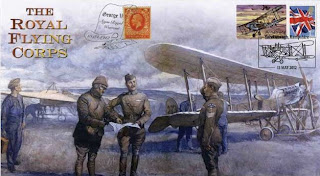 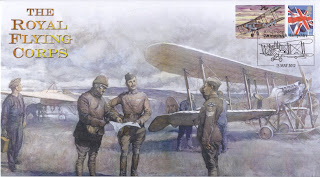 As I was preparing to return it as requested I noticed a strange thing. The Smilers and stamp and label affixed to the cover was not a Smilers stamp as advertised but a privately produced label affixed alongside a Union Flag stamp to look like a Smilers stamp/label.  To say I was surprised would be an understatement. 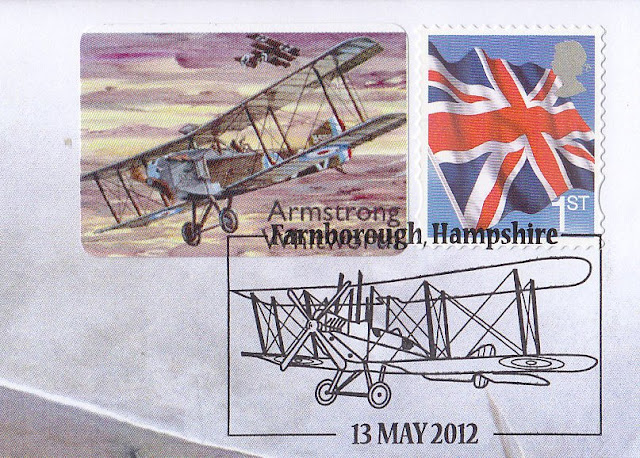 So I wrote to Tony Buckingham and asked him how why they had changed the stamp design, why they had chosen to use a privately produced label in lieu of a Smilers stamp and label and whether they had ever done anything similar before,  because the cover is still being advertised as follows:

Our cover commemorates the centenary of the formation of The Royal Flying Corps. It features a stamp and label from our sheet and is postmarked on 13th May 2012. It also features a two pence stamp and cachet.

I received a reply from one of Tony's employee's as follows:

I've been forwarded your email and have looked into the matter for you. I'm afraid the sheets themselves were delayed and didn't arrive in time for us to be able to use the stamps from them on our covers. As this was the case, all of the covers were stuck with the Union Jack stamp and reproduced label as unfortunately we didn't have another option.
I hope that answers your question and apologies that you have been disappointed on this occasion.

Whilst Buckingham have side-stepped the questions of why the change in stamp design and whether this has ever happened before (I am still pursuing these so hopefully I can update you on their response later this month), I can not accept that this was a credible response to this problem. They completely ignored the personalised Smilers service which for the price of five personalised stamp sheets would have netted them 100 stamps/labels for their cover production run.

What do you think?

Personally I was quite shocked that a reputable company such as Buckingham Covers could take such actions without telling their customers and their response left a number of questions unanswered.  But perhaps it is just me feeling somewhat "sold short" on this cover (I have since returned it for a full refund). I would like to hear what you think so I have posted this article on the Smilers Blog and encourage you to have your say so that appropriate feedback can be given directly to Smilers cover producers in general. If we do not reject such practices the next step will be home produced Smilers labels and stamps!!.
Posted by smilers-info.com at Friday, October 05, 2012